
We use cookies to help improve your online experience. By using this site, you agree that we may store and access cookies on your device. You can change your cookie settings at any time.


● Across industries, average CEO/median employee ratios range from 140:1 in retail to 35:1 in financial services

A report published today by the High Pay Centre think tank and the Standard Life Foundation provides new insights into the pay practices of some of the UK’s biggest businesses.

The report is based on new pay ratio disclosures, published in 2019/20 for the first time, following rules requiring listed companies with over 250 UK employees to disclose their CEO’s pay relative to the upper quartile, median, and lower quartile pay of their UK workforce.

Analysis of the disclosures found that low levels of pay are widespread across the FTSE 350:

1 Pay ratio disclosures show annual earnings for the upper quartile, median and lower quartile employee of each company on a ‘full time equivalent’ basis. On the basis of a 35 hour week, we have taken £19,565 as the annualised equivalent of the London Living Wage of £10.75 in 2019/20. At 34 companies, at least 25% of their UK employees (ie including those outside London) earn less than this amount

2 On the same basis that we have annualised the real living wage, an annualised equivalent of the statutory minimum wage for over 25s would be £14,492 - however there is no suggestion that any companies in our sample have breached the minimum wage requirements. Factors that could potentially drive pay levels below an annualised minimum wage equivalent include the employment of large numbers of workers below the age of 25, and the use of the Coronavirus Job Retention Scheme, whereby workers receive only 80% of their pay. 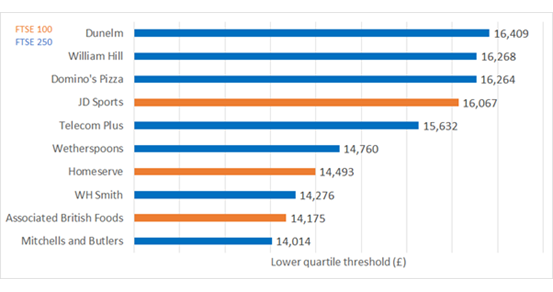 The highest pay ratios were at Ocado, with a large incentive scheme payout to their CEO in 2019/20 resulting in a 2,605: 1 ratio between the CEO and the median employee, and a 2,820: 1 gap between the CEO and the lower quartile. The next highest CEO to median employee ratio was 310: 1 at JD Sports, while the second highest CEO to lower quartile gap was the 543: 1 recorded by BP.

The lowest ratios were at asset management firm Sanne Group, where the CEO/median CEO/lower quartile ratios were 8: 1 and 13: 1 respectively.

Across different industries, the highest average CEO/median employee ratio was in retail, with 140: 1  while the lowest was 35:1 in financial services.

Even within industries, there were sizeable differences between companies. In the retail sector, lower quartile pay at companies whose pay-setting process involves union consultation and/or full collective bargaining agreements, did not fall below £18,000, and the average lower quartile threshold was £18,85.

At companies without full collective bargaining coverage, some lower quartile thresholds were below £15,000 and the average was £17,661.

The report notes that the pay ratio disclosures probably understate the extent of low paid work at major UK companies, as indirectly employed workers often in low-paid roles including catering, security or facilities management are not included in the calculations. It makes a number of recommendations including:

“Pay ratio disclosures provide a valuable new insight into the corporate cultures and working practices of some of the UK’s biggest employers.

“These findings show that quite low levels of pay are commonplace for large numbers of workers at many of our major companies.

“Hopefully the disclosures can help investors, policymakers and of course the companies themselves think more deeply about how to improve fairness at work, and pay for low-paid workers in particular.”

“Today’s report highlights the vast differences in pay amongst UK companies, with one CEO earning nearly three thousand times more than the company’s lowest quartile employee. It needn’t be this way. There is great potential for rethinking pay, benefitting those on lower incomes.

Nowhere is this more stark than in the retail sector which has the highest levels of inequality. During the pandemic the industry either relied heavily on government support or made significant profits. Rewards are not being fairly shared but companies can begin to make plans to reduce the gaps that exist.”